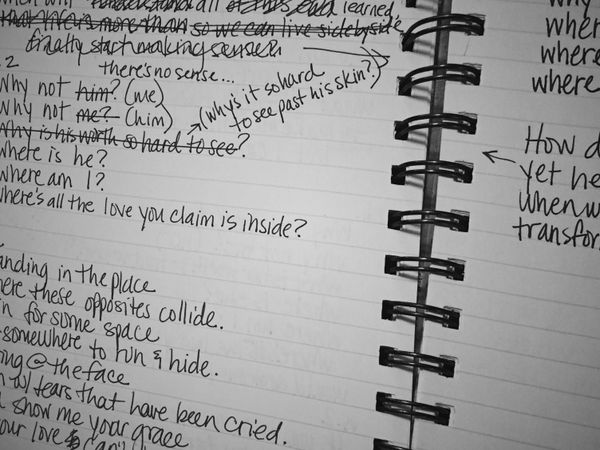 Yeah, you know what I'm talking about. Fear. Oh...that's not what you were thinking? Well, shame on you then! FEAR...Such a small word for such a powerful and devastating thing. Here's how it began rearing its ugly head in my life...and it keeps showing up, even to this day.

My freshman year of college I started writing songs...along with probably half of the population in Nashville at the time. (Now, it's probably up to about 85%!) Off and on throughout my 4 1/2 years in school I would spend time writing...I wrote songs about heartbreak, being in love, anger, God, things going on in the world that I just couldn't understand...very real and very raw stuff. When I graduated, I decided to record 10 of the songs I had written to give to my parents and close friends. Recording the album was SUPER fun!! A couple of my college buddies helped me out by recording it in the studio at school...and we even recorded a couple of the songs in the bathroom of the house they were renting at the time! Nothing like standing right next to the toilet and singing your heart out!!

Once my family and friends had listened to the album, everyone wanted to know what I was going to do with it. Was I going to pursue this thing? All these questions were rolling around in my head and all I wanted to do was run away. I was terrified. Sure, I can throw down a few tracks with piano and vocals. Sure, I can sing in the privacy of a bathroom where no one else can see me. But I can't sing that stuff in front of other people. I'm not good enough. My music is different from everyone else's music. Why would anyone listen to it? And on and on and on it went.

So I quit. Nashville felt too big. I wasn't good enough. What I had to offer didn't matter. And besides...I'd seen other people follow their art and it had taken them to some pretty dark and unhealthy places. I didn't want to risk that. No thanks...I'll pass.

And I ran all the way to Kansas City. After living there for a couple of years, a close friend wanted to try to write together. I thought, sure...what's the harm in that?! And so we started writing. It was the first time I had picked up a pen and put it to paper since college. It felt good. I really enjoyed it. We started practicing some songs and even put together a "set list" to play around town. At this point in time, my son, Jonah, was about one and Tony and I had only been married for a little over 2 years. I started to panic a little bit. All the old fears came creeping back in but this time they manifested themselves in some new ways too. I can't leave my baby home to go galavanting around town singing. What kind of mother does that make me? I should be away from Tony and Jonah as little as possible. It's selfish for me to even think I could do this. And besides, I'm still not good enough. And on and on and on it went. All of it...stuff that I'd made up in my head. None of it true. But it froze me. My friend and I were practicing to sing some harmonies for a guy who was going to play somewhere around town. It was so fun! But these fears wouldn't leave me alone and so before the gig, I quit. I made up some lame excuse and I quit...again.

In the years that followed that time in Kansas City, I only wrote when some sort of inspiration hit. And, as you can imagine, those moments were few and far between. I lived out other aspects of my music...being in community choirs (because I absolutely LOVE singing chorally, but it didn't hurt that I could blend in really easily there), leading worship (which was a HUGE stretch since I had to be the main person up in front of everyone), I was even a pre-school music teacher for about 5 seconds...yeah...never again will I do that!! But writing my own stuff...no, I wasn't going to go there. I'm too busy. My job, church, family...it takes up all of my days and even if I wanted to write, I just don't have time. And besides, I'm not good enough. And I probably don't have anything left to write anyway. And on and on and on it went...yet again.

When we moved to Auburn 2 years ago, fear hadn't darkened my door for quite some time. It didn't need to anymore. I was so far past ever thinking about writing again that I'm sure I seemed as good as gone. BUT...something happened when we moved. I felt a freedom I hadn't experienced in years. I felt a sense of safety and openness that I didn't even recognize in myself. And I sat down at the piano and I started to write. Stuff started coming out. A slow trickle of ideas, melodies, lyrics, wonderings. I decided, hey, I've got some extra time now that my job is way less stressful and time-consuming...I'll just play around with some stuff. No harm, no foul.

Little did I know that January 16, 2016 was just around the corner and that this one day would change the way I thought about everything....more about that in next week's post!

If you haven't already, PLEASE click HERE to visit my Kickstarter!!
We've only got 23 DAYS left to raise the $12,000 or this album doesn't happen!
I'm counting on YOUR support! I hope you'll join me in making this album!