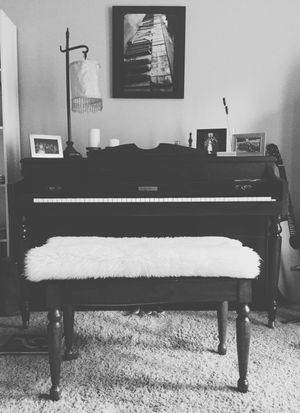 Wow! I can't believe it's been FIVE MONTHS since Coming Home was released! It was such a whirlwind during the Kickstarter campaign and the actual recording process. Then came the craziness of production and getting it out to the world. Release parties and being able to hand out CDs at shows, it was all so exciting and exhilarating and I absolutely loved every minute of it!!

Then came the silence and the stillness of the aftermath.

I wasn't expecting the excitement to continue full speed ahead or anything. In fact, I wasn't sure what to expect at all! But I hadn't prepared myself for the stark contrast I have experienced since January. Once the thrill died down, I found myself in a bit of a lull. I didn't know what was next. Should I try pushing myself out there (which is TOTALLY not my thing!)? Should I just sit back and wait and see what happens (which is not helpful at all!)? Should I crawl into a hole and cry because I don't know what to do next (don't worry, I mostly stayed out of holes!)?

I sent my stuff out to a few different places, with little return, hoping to get out and play some more. I felt so helpless and alone. Obviously, never having done anything like this before, I wasn't even sure where to begin! And even in the few shows I had since the new year, I felt different playing all the music I had just poured so much of myself into. I was feeling pretty discouraged and frustrated that I wasn't seeing a path forward.

Then my ever wise husband, Tony, said something that I totally blew off at first (because I didn't want to believe it). He said something like, "You sound different when you're playing now. Do you think maybe it's because you aren't creating anything?" And, because I didn't want to believe or even think about what he was saying, this was my inner monologue reaction: First of all, I don't sound different!! I'm singing the songs exactly like I always have! I don't know what you're talking about! Secondly, of course I'm not creating anything! I just created a whole bunch of stuff that took all my courage, heart, and soul to accomplish! Why would I create more right now?! I'm supposed to be living in the satisfaction of what I have just finished and continuing to share it with even more people!

Oh man...it sounds so ridiculous when I write it out! But it's exactly what I was thinking. And do you know why? Because I was scared. I was scared of not continuing to push myself out there and play more (because that's what I'm supposed to do, right?). I was scared of what other people might think if I wasn't racking up the shows. I was scared of letting everybody down. But, most heavily, I was scared that there was nothing left to create. What if I begin again and there's nothing there? What if that well has gone dry?

I sat with that stirring inside of me for a few months. But then I began to see a path forward. Creating is actually the part I ABSOLUTELY love the most, even though I was pushing back on it. Creating brings life to my soul that I never thought possible. It is incredibly thrilling while at the same time tremendously terrifying to have something that never was before come to creation through me. And I began to realize that creating is right where I need to be. It brings life to all the things I've already created, it brings life to me. And maybe, just maybe, if I will sit down and begin again, something new will be born.

So here's where I am now...I'm trying to get back into the discipline of writing something every day. And as a new song is born, I want to share it with the world. I don't want to wait for an entire collection of songs, so I'm going to release them as they come. And I want these songs to be organic and raw in their production. So they'll be stripped down to just me and my piano. I actually have a few right now that are so very close to being ready and I'm very excited to share them with you!! So be on the lookout in the next few weeks and months!

Thank you for ALL of your love and support! I feel so very grateful to know that you are out there even if I might not get to see you! Knowing that you care gives me strength and courage to keep pushing forward, even in the face of what looks like insurmountable fear!

And one last thing, if you haven't downloaded Coming Home yet, I am extending a special offer. Through April 17 (yep, that's right, tax day) I am offering the entire album for FREE on Noisetrade! Just click HERE and you can download Coming Home for FREE! And please share with your friends and family too! The more the merrier, right?!

I'll leave you with this quote that I have been meaning to hang beside my piano for YEARS (literally...two and a half of them to be specific). It's from Andy Warhol. He says, "Don't think about making art, just get it done. Let everyone else decide if it's good or bad, whether they love it or hate it. While they are deciding, make even more art." I think it's time for me to finally hang that up, huh?